Last Friday, SVG had the opportunity to

provide live event videography for Tropicana just outside of our office in Faneuil Hall.
Instead of simply handing out samples of their new line of Farmstand juices, Tropicana hosted a harvest festival free to the public. All day, city-goers passed through to play carnival games, win prizes, listen to the live band, and, of course, enjoy some juice. Our team was on the job to record the day’s events.

Our Director of Photography filmed the crowds, trailed by a member of our team on sound. A time-lapse video was also being recorded from a GoPro installed in a tree the night before. Although the GoPro is waterproof, we needed to keep it plugged into a power source, which meant opening the USB hood and making the device vulnerable to the rain. Chuck’s resourcefulness led him to build a birdhouse-like structure over the camera to protect it. Chuck was also anticipating securing the GoPro to a different tree, so when changes were made to the design plan, he modified his structure to fit the one across from it. 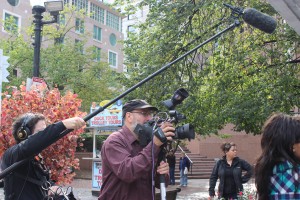 We enlisted our photographer to ensure that plenty of photos would be taken of the event. Another challenge we faced was having people sign release forms for the videos and pictures we took. Although signs had been hung up on either side of the fair stating that the event was being filmed, audio recorded, and photographed, it was still necessary to obtain waivers from those who were prominently displayed in our recordings. Tropicana can now use those images for their own purposes, if they choose.

Children were especially difficult to obtain waivers for because many were brought to the harvest festival by a babysitter who did not legally have the right to release images of their faces. Many adults and students with the day off however were very flattered to be signing a “talent release.”

While it was difficult to keep up with the many people who passed through, it was necessary in order to deliver the most usable footage for a corporate promotional video like this.

Unfortunately, later in the afternoon it began to rain sporadically, sending everyone under the tent over the juice bar. Despite this, everyone continued to enjoy juice and watch as a juggler/magician performed tricks. The band even resumed playing.

Using video for these marketing purposes allowed us to capture this genuine moment portraying the relentless spirit of Boston and, overall, everyone had a great time.