How to Prepare for Live Video Event

On Wednesday, August 15, 2018, Skillman Video Group did a shoot for a live conference that Coverys put on. The shoot was only to film one speaker, so it did not take all day. It began at about 11:45 and ended a little bit before 4 pm.

The cinematographer’s name is Chuck Green, and the production assistant’s name is Bridget Wixted. After both of them arrived on set for Boston video production shoot at 11:45, they waited a little while until the current conference was over so that they could set up and meet with the people providing the audio for them.

On shoots where the crew is filming a live event, it is common that the venue they are filming in will provide an audio feed for them. 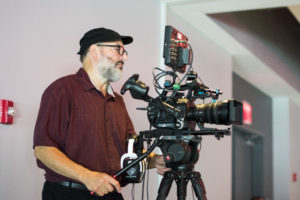 Once the audio was set up, Chuck set up his camera first on the ground, and then he moved it to the riser platform he was given to film on. Having a riser platform is very important when filming for a live event, as it enables the Cinematographer to get an eye level shot of the speaker without getting in the way of the actual live event that is going on.

Once the camera was set up, the production assistant went to stand on the stage so that Chuck could get a sense of the lighting and the actual setup of the shot. It helps to do this with someone standing in as the speaker. The camera settings were all set.

Then the crew went to talk to the speaker. Her name was Celeste, and she was a broadcast journalist from NPR. She was a very experienced speaker, so the Boston Production crews was confident that she would be comfortable while being filmed and recorded. The crew did a sound check on her, and made sure she would be able to be heard during her talk.

During her talk, the filming went on very smoothly. The only issue was that the lighting was not very good in the room where the talk was being held. There were windows on the right of the room that were casting strange shadows on the speaker’s face, but other than that the filming was perfect.

Wrapping up the shoot for video production companies Boston, the crew put away all the equipment and downloaded the video footage onto a hard drive. All in all, the day was a success!

Skillman Video Group LLC is one of the Top Boston video production companies. Call us anytime at 1-800-784-0140.