Although we run into challenges even in our “comfort zone” corporate office shoots, when encountering similar problems again and again, we tend to get used to them. But, of course, our work takes us into a wide variety of situations in many different environments, and in these situations, we learn to adapt. 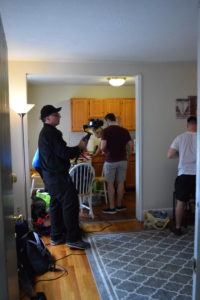 Our last shoot took us to an apartment in Dorchester, which was being set up for a formerly homeless family to move into, organized by nonprofit Heading Home and their corporate sponsor, HomeTap, our client. We were asked to document the move as it was happening, and to additionally shoot several clean, professional interviews in that apartment, in which there were around thirty volunteers moving around inside.

The first obstacle we encountered was that by the time we arrived to the space, it appeared that most of the major aspects of the move had already been completed. That left us rushing to put together equipment, and in order to capture all parts of the move, we asked some volunteers to stage certain shots, for example, asking them to take down and re-hang picture frames, or to put furniture into place again. From there, it was a matter of getting as much footage as possible, while still remaining non-obstructive.

Shooting the interviews posed its own unique struggles – shooting in a small room meant that we needed to squeeze lights into the space while making sure nothing fell over, and that we could not close the door, a measure which would have prevented light from coming in. We were also fighting an excess of background noise both from the street and from the volunteers. Because it was a small apartment, it was necessary to close all windows and turn off all the fans in the apartment, which, on this summer day, meant that it was excessively hot in the apartment for the time that we shot each interview. We fought the shine on each interviewee’s face with translucent powder. The interviews were shot on a Sony FS7 camera with both a lavalier mic and a boom mic, lit 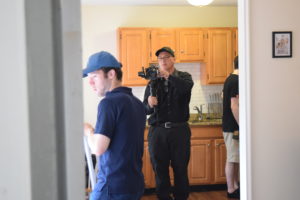 After the interviews were complete, it was a matter of minutes before we were ready to welcome the new family into their new home.

If your organization is doing great things for your community, consider video documentation or marketing with Boston video production company, Skillman Video Group to share your impact with the world, boosting your company’s credibility, and inspiring others to do great things as well.