Pomona College located in California, was looking for a Boston Video Company to partner with. They came to us due to the long standing relationship we have with MIT. This past Friday October 20th, Skillman Video Group took part in creating the video content for Pomona’s most recent project. The editor of the college’s magazine wanted to do a piece on an Alumni, who is now studying as a Grad student at MIT. 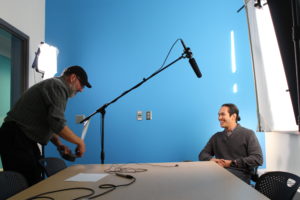 A very small crew from SVG took part in this shoot; Chuck, one of our Boston Videographers, and one of our new PAs, Kristen. We worked with an amazing Grad student named Scott Tan, who is working in and studying Mechanical Engineering.  His interview went very well. Kristen took the role of the Interviewer, she asked him questions about his time as a student on both coasts and how he has adjusted to the work he is doing at MIT. With some nice prepared and follow-up questions we were able to have a very conversational tone, that sounds great on tape. He had very insightful things to say about his time at both Pomona College and MIT. It can be hard for someone new to step in front of a camera and speak confidently, but Scott did a great job.

We shot the interview in one small conference room in the Sloan Laboratory, where we worked to make the lighting best for our interview. Using a key light with diffusion to soften the look and a fill light to reduce contrast, we created a great look. For the second phase of the shoot, we had to film the B-roll footage. MIT has amazing laboratories, and Scott was able to bring us into some to get great shots of him at work. The switch from Interview to B-roll was not a difficult switch. We had to deconstruct the lights before we left them locked in the conference room, and only brought the camera and tripod to the labs for the B-roll. Our Boston Videographer worked with the camera both on and off the tripod to get the best shots. It brings life to the interview by being able to see the machines and work that Scott has been doing.

This project was very enjoyable for the SVG members present. Scott was a great interviewee to work with, and we got some great shots. We wish Pomona College the best with the edits as we send the footage to the West Coast, and hope to hear from them again if they ever need video production services in Boston.