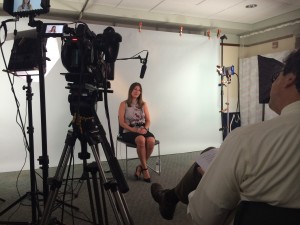 Last week was a busy week for us over at Skillman Video Group. On Monday and Tuesday, we had 2 shoots with a construction company, and then on Friday we had a shoot located at Brockton Hospital. Hired by Jennings, we went to the hospital and set up a room in an interview style.

First, a backdrop (picked out and purchased ahead of time) was brought in and set up. 2 LED and 3 Fluorescent lights were then assembled to light the backdrop and the sitting area of our subjects. We ended up using two cameras: one stationary (focused on a medium close-up) and one roving (to capture B-Roll). 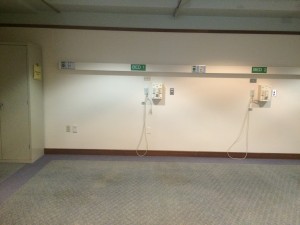 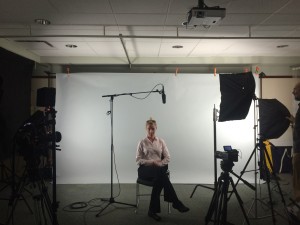 For the day, we needed full interviews with 8 people, so there was no time to waste. That’s why we brought in an audio engineer to ensure that things ran as smoothly as possible.   This allowed for our Director of Photography to focus on the look of the video rather than have to also pay attention to the sound.

Our DP arrived at 6am to make sure that there was plenty of time to get everything ready. By 8am, the camera, lights, and audio were ready to go, and our first interviewee was in the chair.

The schedule allowed an hour for each interview, which gave us plenty of time to get all of the questions answered and still have time to allow for short 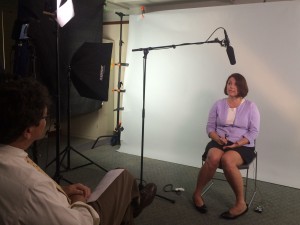 breaks in-between.  The interviewer (from a separate marketing company) made sure that each person was at ease in front of the camera and crew.  Since there was an hour to spare, the interviewee had no need to rush or stress, allowing for multiple takes.  Always better to take the time to get the perfect takes rather than just settle for lesser material.

The plan is to make a short video out from each interview.  As the client observed, a lot of content can be created from a single shoot day.  Interviews are a great way (particularly when just using a single backdrop) to produce a lot of videos quickly for distribution either internally or on your website.  With us already at work on the post-production, the quick turnaround will soon be made even more obvious.

What is B-Roll?
On Set: Branded Video for Bond – Part 2