History and Development of Editing

After you have finished shooting a video, its just a quick stop in the edit room until it is ready to be shown to the public, right? Wrong. Video editing is a time-consuming process and a very under rated aspect of the video production process. Most directors will tell you that for every hour of video they shoot, they get anywhere from one to five minutes of usable footage. And that is with all the advancements of the modern age. Imagine how long and tedious the video editing process was back when it was first in use. To fully understand how far along video editing has come and where it can go in the future, you first have to understand how it all started.

To be honest, filming and editing video is a new concept, relative to time. In just over a hundred years, people have gone from using scissors and tape to trim unnecessary footage to the computer based non- 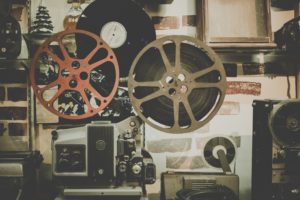 linear techniques of today. For the first eighty plus years editing was done using the linear method. The linear method of editing involves arranging images and sounds in order. At the beginning, this did involve using scissors to splice the footage and then using tape to attach it in the correct order. Methods like this were used until the 1920’s, when the first editing machine, called the Moviola, was invented.

The Process of Editing

The Moviola was important to the evolution of video editing because it was the first machine where the editors were able to see the film while determining where the best cut point would be. This helped deliver crisper, better edited films. The Moviola advanced video production services tremendously and was the standard of usage in the film industry for almost fifty years. Starting in the 1950’s however, the video tape recorder came along and helped advance the video editing process advance towards where it is today.

From its beginning, TV used film to shoot and edit. In 1956, the AMPEX Corporation debuted the first Video Tape Recorder. The VTR was the first device to use magnetic tape to record video. It was favored by the growing television industry due to its convenience and cost. The first VTRs were revolutionary because of the way they recorded video. The video was recorded using transverse scan technology. At

the time, video had a much higher bandwidth than audio, so it required a much higher tape speed to record. Using the transverse scan method meant that the video would be recorded across the width of the tape, and not just down the center, as had been the case up until this point. This allowed much more data to be stored onto the tape thereby lowering the tape speed required to record. Doesn’t all of that sound fun? Luckily for editors around the world, more efficient ways to speed along video production services were on the horizon.

Up until this point, editing video consisted of finding the right spot on the tape to cut, then tape it to another piece of video and hope that the edit was smooth. If the cut wasn’t smooth, you’d have to record off the master again and again until you got it right. And while this method of editing was used up until the late 1990’s and early 2000’s, the path to making it obsolete actually started back in the 1960’s with the advent of electronic editing.  In 1961, the first electronic editor controller first appeared in various video tape recorders. The EECO 900 used timecodes to give the editor a better idea of when to stop or roll a tape. Also during this time, the first electronic editors by AMPEX were invented. The AMPEX Electronic Editor was a godsend for video editors at the time, as it allowed videos to be edited without cutting and splicing the magnetic tape. All of these advances in video editing helped set the stage for the non-linear dominance that we know today.

Difference Between Linear and Non-Linear Editing

Ever see an old movie or video where someone is shown a new thing called a computer and everyone is in awe of it and it takes up half the room? Well, the first non-linear video editing system, the CMX 600, was very similar. It introduced the world to non-linear editing and it required so much disc space that the the disc drives it used could be the size of a home washing machine. Non-linear editing is an extremely important video production service advancement because it does not require the original content be modified at all. Instead, the pieces you want edited are allowed to be taken out and placed onto an alternate timeline, preserving the original. Starting in the late 1980s/early 1990’s, digital editing software became available and companies such as Avid provided Boston video production companies the ability to work within an editing suite.

For about the last decade, digital editing has dominated the video production process. Digital cameras are used to shoot digital video, which then get edited on a digital video editor. The digital process provides you with the clearest picture and sound available and just about anyone with a smartphone has the

capability to take advantage of it. Will this trend hold out in the future or will a new technology come along and take its place? If history is any indication, a new and improved way to help  video editing  will emerge and take it to places it has never been.