A video shoot can be stressful for all parties involved, the video production crew and the clients, but it’s the production crew’s job to create a relaxed environment and make sure everything runs smoothly for the client. Recently, Skillman Video Group shot a marketing video for Kenney & Sams Law Firm. The video itself would be 2 minutes long and around 6 employees were interviewed for the video. Although the Kenney & Sams employees were hesitant at first, by the end of the day they were all laughing and opening up to the video production process.

What made this video shoot different from prior shoots was that our client hired a marketing counselor to oversee the interviews, and make sure that previous workshop discussion topics were elaborated on and incorporated into the interviews.

However, when working with new clients, a relationship based on trust needs to be developed. Though meeting with the client, and discussing the overview of the video can be helpful, it really isn’t until the day of the shoot that the client and production crew are able to collaborate and develop that trust. For this particular shoot, our professional videographer, Jake was well equipped with the highest quality of lighting and camera equipment. Once the clients saw themselves beautifully lit on the large camera monitor they were able to open up more for the interview questions. 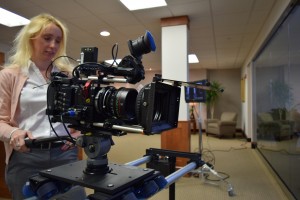 Equipment can be all the difference in the visuals of a video. In other words, with the perfect lighting equipment and camera lens any ordinary setting can look sophisticated. SVG’s professional videographer, Jake has all the best equipment including Zylight’s and a Sony F55 Syna Ultra Digital Camera.

To begin, Zylight’s are unlike most LED lights and are considered to be the highest quality lighting in the video production field and are used in many movie and film productions due to their ruggedness, reliability, and ability to conform to any environment. Also, some may notice Zylight’s gives off considerably less heat than most LED lighting equipment.

For this shoot Jake used a Zylight known as the F8 200 LED for illuminating the background and the Pro Panel, otherwise known as Keeno for soft lighting and highlighting the interviewees faces.

Besides the Zylight’s providing a perfectly lit setting, the Sony video camera lens made all the difference in the video, and especially for our “dramatic shots” by providing emotional intensity we were looking to capture. Jake also set up a dolly track for the video camera, which displayed smooth movement for b-roll while also giving a natural look and a different perspective compared to regular standstill b-roll.

Having high quality equipment can make all the difference in a video visually; however, what makes a video is creating a trustworthy relationship with a relaxing atmosphere for the clients.