Boston video production is what we live for at Skillman Video Group, and no matter what the video we always find a ways to have fun with the crew members and clients. SVG recently had the pleasure of working with the TimePayment company for a 5 part commercial video series, which included fire, sparks, confetti, and cats. This video production shoot wasn’t just a one day event, but two. For such a long video commercial it was imperative they we stay on task and organized throughout the two days.

Unlike some of our other Boston video production shoots, which are on location of the company’s business, this marketing video required a large studio. SVG couldn’t have picked a more perfect location at the Red Sky Studio in Allston, Ma. This studio is use to many different moving parts and hosting large video production sets. Over the course of the 2 days we had about 15-20 people moving on and off the set at once. Some of these moving parts included:

Yes, a lot of moving parts were on set, but being in such a large studio you barely noticed how many people were there because each had an important duty to keep the day rolling. One particularly important feature displayed for the crew members was the story board. A storyboard shows the order of shots taken for each particular scene and how the shot is to be taken. For instance, for one shot the storyboard will call for a “CU” (closeup) and a “WA” (wide angle). This gives more than one option for the video editors to use in post-production. Some may think that having so many takes and so many angles is ridiculous and time consuming, but in the video editing world there is no such thing as too many options. At SVG we love options and it ensures that we have the perfect takes for each scene.

Besides our professional videographer who is required for every corporate video production company in Boston, our audio crew is less of a necessity unless we are producing a live event or a large commercial such as this one. This is not to say that audio isn’t important, for it is the most important part of a video. If the message isn’t clearly heard then all that glorious footage is put to waste! For this marketing video phrases and words had to be clearly heard and pronounced perfectly, which is why we brought in professional actors and our audio crew. The actors brought life to the lines and made the commercial believable as well as entertaining. Not only that, but there is a sense of emotion that is brought onto the screen with the actors, and in the case humor was what we were shooting for. It is one thing to have the script and just have a person read off the lines, it is another to have a professional actors who knows where to stand, face the camera, and capture the audience’s attention. The combination of the actors and the audio crew ensured that the message was clear and said correctly. Wireless lavalieres were on all of our actors and our audio crew also used a boom microphone. The best part of having an audio crew is they are able to hear any sounds that might be picked up from outside the studio that might interfere with the actors audio.

Though there were a lot of moving parts on set, the only drawback for the day was our hired cats. Take note, as a corporate video production company the most difficult actors are animals and babies. At SVG we try to avoid any concepts that involve children or animals because you never know what you are going to get. Although against our greater judgment, we decided to see if the cats would perform the scene for the cameras. Spoiler: Cat #1 didn’t budge and wasn’t a bit interested with the treats in front of him. Cat #2 was interested in the treats but not enough to perform his scene.Fortunately we had a Plan C in place, which didn’t involve real cats. Instead, we changed some camera angles and created a “subliminal” effect to replace the cat. 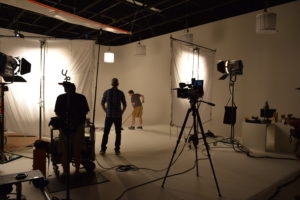 As a corporate video production company in Boston, you have to constantly be prepared for changes in the script, set, scene, and/or actors. Having over 10 years experience we stayed composed when the final cat walked out of the studio with nothing to offer because we still did. Being surrounded by creative crew members with years of video production experience made the video’s results go beyond what the writer and client expected. Hearing such a statement makes us that much more excited to work with the client on marketing videos down the road.

SVG Does Practical Effects
Is Your Boston Business Being Heard?